Changes at Easton and Otley College farm mean students are spending more time learning practical skills.
Does an agricultural college need a working farm? That was one of the first questions put to a new advisory board at Easton and Otley College.
The board, made up of local farmers and representatives of the farming industry, gave a unanimous ‘yes’: a working demonstration farm is vital for educating the next generation of agricultural students.
For Tony Buttle, manager of the 200ha farm at Easton, near Norwich, and 40ha at Otley, north of Ipswich, it’s encouragement to continue his mission to help prepare students for work in the farming industry.
Tony, who until a year ago was managing a farm in west Norfolk, had complained that students weren’t work-ready coming out of formal education.
“I’d been employing students from universities and colleges for 10 years, and the standard had dropped: students hadn’t had sufficient training and were missing the basics,” he says.
“When I was a student in the late ‘80s, it was a three-year course, five days a week, with dairy, sheep, pig and arable duties. Now the same course runs for three days a week over two years. The students aren’t work-ready.”

So when he was challenged to do something about it, he decided it was time to give something back to the industry.

“I can say that the job of a commercial farm manager is a lot easier! Here, not only do I have to justify all my decisions to the board, but also to 230 critics: the students. I must be able to demonstrate anything I do and explain why I’m doing it.

“But it’s very rewarding when you take someone with no agricultural knowledge and at the end of the day or the year that person can drill or plough or calve a cow or lamb a ewe. You have to be able to bite your tongue and be patient, but that’s the nature of the job.”

Last September, the arable land at Easton was taken back in hand, having been contract farmed for a number of years. Now the students have more opportunities to spend time on the farm learning practical skills. And, because they have a greater sense of ownership of the farm, they are more than happy to stay on and help beyond lesson time, and to come in on their days off campus.

“All the farm staff need to be on board and willing to step back and let students do the tasks – and to bite their tongues when things don’t go right. We all have to make mistakes to learn. My role is more about guidance than actually doing work with the farm staff.”

Soils vary from heavy clay to blowing sands – useful from an educational point of view – and this year are growing winter wheat, sugar beet, winter and spring barley, lucerne and maize, with some light land let out for potatoes.

Students are looking at different rates of nitrogen and fungicides, and comparing results using Mzuri and Clayton direct drills and conventional farming methods.

“We’re also growing some quite dirty varieties of wheat and barley so that they get diseases that the students can actually see them in the crop and try out various treatments. They are commercial crops as well, but we’re leaving small unsprayed areas.”

The farm is receiving a lot of support from local industry, including Ben Burgess and Thurlow Nunn Standen, lending machinery and expertise. Local farmers, too, are getting involved: nearby Honingham Thorpe Farms is running trials on irrigation of potatoes, and dairy youngstock from Danns Farm at North Tuddenham are being reared on the college farm.

On the livestock side, there are long established sheep, cattle and pig enterprises. A flock of 200 Mule cross ewes lamb in March at Otley, 100 at Easton lamb in January and a further 50 in time for the college’s Lambing Weekend held on the first weekend in March. This year also sees the first Lambing Day at Otley. There is rotational grazing and permanent pasture for the sheep, including at both county showgrounds, and the lambs are finished on stubble turnips.

“We also have 18 Norfolk Horn ewes, which give us a good comparison with the commercial flock and enable us to do our bit for the Rare Breeds Survival Trust. The students show them at around 10 local shows a year, including the Suffolk and Royal Norfolk Shows. It’s very much student-led. And now with our partnership with Danns, they will be able to show Holstein Friesians as well.”

Red Poll cattle at Otley are also shown by the students, and they also take part in a Red Poll inter-college competition. Easton has Highland cattle which are well suited for grazing water meadows alongside the River Yare, but their long horns put some of the students off handling them, so they are going to be replaced with Red Polls.

As well as the slower growing native breeds, British Blue, Aberdeen Angus and Limousin crosses are reared for commercial beef production. Black and white steers are also bought in for comparison.

“It’s all about education: the Rolls Royce and Reliant Robin of the beef world. The black and whites take forever to fatten, and we might get £800 for a 600kg animal, whereas a Blue cross of the same weight will make £1500.”

Andrew Clarke, managing director at Blake’s abattoir, is very keen to support the students, as is Graham Ellis at Colchester market and pig company BQP, for which the farm finishes batches of 400 pigs on a bed and breakfast scheme. When the weaners arrive on the farm, the students sex, vaccinate and group them, and then monitor their weight and pick out the finished pigs.

“My ultimate aim is for the farm to be run totally by the students with a little bit of guidance, turning out ready-to-work students with the necessary certificates for industry, who have used the latest machinery and technology available.

That would require courses to be adapted slightly, and that sort of change has to take place at a higher level, but at a farm level it could definitely happen. There’s no reason why students couldn’t totally manage a field of wheat, for example, and see the results of their management.

“But colleges can’t afford the latest equipment and so we need help from industry. And we need farmers and others involved in the industry to tell colleges, educational departments, MPs and so on what they need. That communication has started.”

We have been successful with our Apprenticeship students, now it is time for those in full time to be given the opportunity to raise the bar of achievement. Labour on farms is an issue throughout Europe. Let us give the next generation the tools to feed the world! 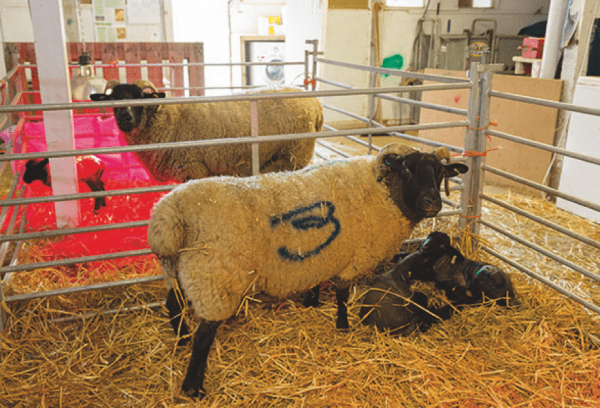 Easton and Otley College’s early lambs – look closely………..has the UK’s use of technology in farming reached the stage where lambs can be ‘beamed Star Trek style’ into the world?

Or is it just a heat lamp? Last year we were struggling against ‘The Beast from the East’, a weather system that brought Siberian weather to the farms trying to lamb sheep. So far this year it is the mildest February for decades. Typical UK, you never know what’s going to happen!