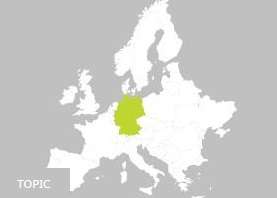 Germany lies at the heart of Europe and shares its borders with nine other nations. No other European country has more neighbours. In the north, Germany has access to the North and Baltic Seas. In the south it borders on the Alps. At 2,962 meters the Zugspitze in Bavaria is its highest peak. At 3.54 meters below sea level the lowest point on land is near Neuendorf-Sachsenbande in Schleswig-Holstein.

Germany has a population of 81.2 million people and covers a surface area of 357,740 square kilometers.  Germany is a federation, the capital is Berlin. The federation and the 16 Länder (states) each have areas of responsibility of their own – for internal security, schools, universities, culture, and municipal administration. The administrative authorities of the states enforce not only their own laws, but also those of the federation. Through their representatives in the Bundesrat the governments of the states are directly involved in the federation’s legislation. Federalism in Germany is more than just a system of federal states; it represents the country’s decentral cultural and economic structure, is deeply rooted in tradition and is often a reflection of pronounced regional identities. 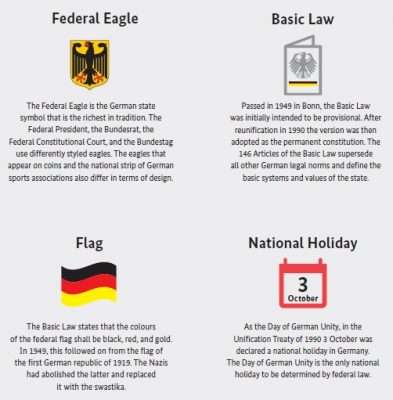 The strong position of the states was established in the Basic Law in 1949; on reunification in 1990, five new states were founded: Brandenburg, Mecklenburg- West Pomerania, Saxony, Saxony- Anhalt, and Thuringia. With 17.6 million inhabitants, North Rhine-Westphalia is the most populous state, while its 70,550 square kilometers make Bavaria the largest in terms of surface area; with 3,838 inhabitants per square kilometre Berlin is the most densely populated. There is one peculiarity: the three city states, namely Berlin, Bremen and Hamburg.