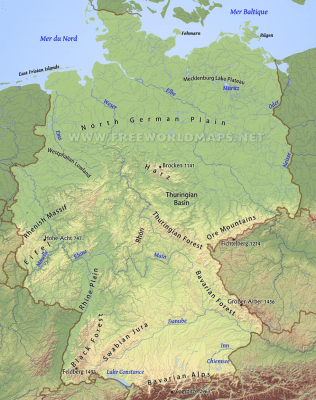 The landscape of Germany is very varied, from the peaks of the Alps in the south to the low-lying areas of flatland at the 1,200 km of coastlines at the Baltic and North Seas in the north. Between these extremes you find highlands, rolling hills, lowlands and beautiful lakes and rivers, which can be experienced in more than 100 nature parks allo over Germany. Forest covers almost a third of its total surface area. Lakes, rivers and other inland waters account for more than 2 percent.

The Rhine is 865 km long and the longest river in Germany. In the southwest it marks the border between Germany and France, further north Bonn, Cologne, and Düsseldorf all lie on its banks. The Elbe, the second longest river, links Dresden, Magdeburg, and Hamburg and flows into the North Sea.

Thanks to a wet climate and moist conditions—as well as the government’s dedication to environmental protection—Germany shelters a delicate array of flora and fauna that becomes more diverse every year, thanks to conservation and reintroduction programs. The country doesn’t host unique animal or plant life (you can find its trees, plants, birds, and animals in other part of Europe), but its many national parks, nature parks, and Biosphärenreservate (biosphere reserves) serve as refuges for trees, flowers, plants, shy mammals, and birds.

Germany’s diverse landscape is home to an equally diverse group of plants and animals. While some, such as the migrating sturgeon in the River Inn, are in danger of extinction, other species—like the capercaillie—thrive. Many plant and animal species call Germany home, and the country has a wealth of biologically diverse regions.

The black eagle is the national animal of Germany. The cornflower, the national flower of Germany, grows wild in the country. Because of its proliferation in all corners of the country, the mighty, solid Eiche (oak) tree also serves as one of Germany’s national symbols.