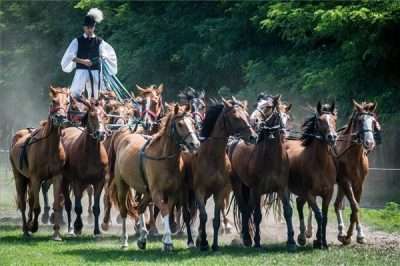 Did you know that the ancestors of the Hungarians came to the Carpathian Basin on horseback? Nevertheless, even today the horsemen of the Great Plain (southern and eastern Hungary) are unbeatable when it comes to spectacular riding exhibitions.

Recently Gábor Besze, a wrangler from Bócsa, has broken the Guinness Record by performing the so called PUSZTA-17. Standing on 2 horses Gábor was controlling no less than 15 other galloping animals at a great speed! What an achievement!

This kind of traditional riding routine started with 5 horses (named PUSZTA-5) at some time during the middle of the 19th century and was developing steadily up until this newest success, which was also recognized in the Guinness Book of World Records.

Interested? Watch this beautiful two-minute video and see it for yourself 🙂