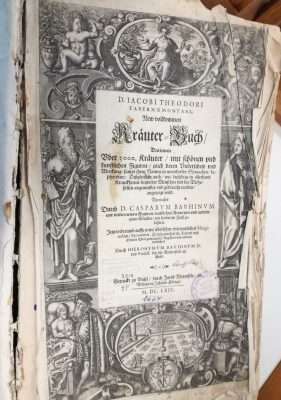 During the visit to the university in Cluj-Napoca, the “Krauter Buch” by Jakob Dietrich (Jacobus Theodorus Tabernaemontanus, 1525 – 1590), edition 1664, was exhibited in the library. I was immediately interested because I was struck by the size, the layout and illustrations in the book. The similarity to another work from that period, the “Cruijde book” by Rembert Dodoens (Rembertus Dodonaeus, 1517 -1585), edition 1644, was striking and it turned me on to take a closer look.

However, no direct connection was found. The two contemporaries were influenced by the same botanists from the early Renaissance (Mattioi, Bock, Brunfels, Fuchs). And in the end the printing techniques were the same everywhere in Europe. There are major differences in terms of content.

The only connection I could find was that the work from both authors was copied later in ‘The Herball’  (1597) by John Gerard. The text came very largely from the work of Dodoens while the illustrations came from the work of Dietrich, according to some commentators with the intention of hiding the sources. Not immediately an international exchange to unpack.

Anyway, the Botanica that developed in the Renaissance was the product of international exchange. Mattiola (Italian), Bock, Brunfels, Fuchs, Dietrich (Germans), Dodoens and later de L’Obel (a friend of Gerard (Englishmen) who later complained about plagiarism of the latter) and Clusius (Flemings) were key players in the new insights into the Botanica.

It would take until Carl Linnaeus (Carolus Linnaeus, 1707 – 1787) with his sensational works Systema naturae 1735 and Species plantarum from 1753 before the Botainca again experienced a landslide.

It seems that, but that is a personal interpretation, every time new means of communication appear (letterpress in the Renaissance, eMail and social media in our time) the international exchange gets a boost. Something that can be stopped by war and social unrest, as history unfortunately proved to us.

Let us pay attention to that together! 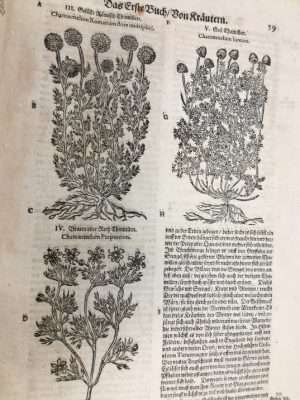 It is common in the Botanica that people who, in one way or another, made a difference in the field, were assigned a plant (or plant genus) that bears their name.

Search for the above mentioned persons their honor (plantgenus):

Acknowledgements: many thanks to René (BE) 🙂