LEGAL EAGLE – road to legalisation
May 30th 2018
History of EUROPEANews

After the very successful “May in Strasbourg” meeting of European Green VET students in Erstein (near Strasbourg, FR), the next milestone event in the history of EUROPEA was the reunion of COE (Comité d’organisation d’EUROPEA) members in Edinburgh (GB), which took place between 28-31 October 1992.

The triumph of the Erstein meeting lead to the decision to lay the legal foundations of a comprehensive European network that would connect and tie all Green VET actors of the continent and encourage professional cooperation. 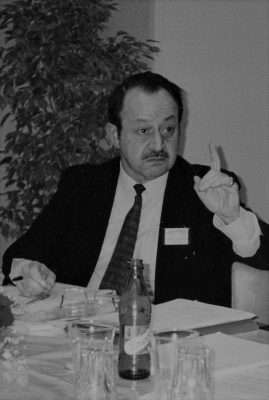 Pic no1: Georges Demeester, The Man of the Statutes

During the Edinburgh meeting in October 1992 the early “EUROPEAns” analysed the reports of the “May in Strasbourg” event, talked about the future of the network and discussed the role of national organisations in it.

The Belgian team had previously got the task to elaborate the first version of the EUROPEA Statutes, which was then presented in Edinburg. Georges Demeester(BE), as a legal expert, introduced the content of the created document, and after intensive and prolific discussions a temporary version was approved by the delegates.

National coordinators were obliged to introduce the would-be statutes in their own countries and name a delegate responsible for the signing of the final legal document. The date for the next meeting was set for 13-15 January 1993 and Luxembourg was appointed as the hosting country.

Colleagues from 10 EU states – Belgium, Denmark, France, Great Britain, Greece,Ireland, Italy, Luxembourg, The Netherlands, Portugal – who were present in Edinburgh took on the task to fulfill those duties and meet again a few months later. Thus, preparations were over and the scene was set for the closing act: the birth of our association.