MISSION WORK OF THE BULDURI HORTICULTURE SCHOOL DURING THE VISIT OF HIS HOLINESS POPE FRANCIS IN AGLONA BASILICA ON 24th SEPTEMBER, 2018

From September 22-25, 2018, His Holiness Pope Francis visited Latvia. He attended the state catholic religion centre and the sacred place—Aglona Rome Catholic Basilica ofthe Assumption of the Virgin Mary into Heaven.

Teachers and young professionals from the Bulduri Horticulture School Floristic’s programme made 40 flower decors of different sizes, the biggest of them being the décor for the balcony—25m long and 1m high.

A valuable experience for the future professionals

Planning works in Basilica began already in the spring. The necessary decor shapes, sizes and numbers were fixed, as well as suitable vases, flowers, and colours were chosen.

The students of the school rarely have the possibility to decorate sacred premises, therefore, from May till September they had a chance to get acquainted, in detail, with the basic principles and requirements of decorating sacred premises, as well as with the rules on how to behave in a church, working in places where people are not usually allowed to go. This was a really educational, blessed and inspiring work!

Decorating rules during the visit of His Holiness Pope Francis

The basic principles of a sacred premise decoration in Christian churches are common; however, each church has also its own rules. It was decided that during the visit of His Holiness Pope Francis in Aglona three basic colours will be used—white, yellow (golden), and green. Flowers and other plants for the decoration had to be only natural. The flower decors had to be luxurious and at the same time, not distracting attention from the main event. A specific security issue was that decors were not allowed to be massive and disturb visibility. Everything had to be calculated very precisely! Ineta Ozoliņa–Skrūzmane and Ilze Bāne, teachers of Bulduri Horticulture School, together with their students—future professionals, had prepared impeccably, and the decoration work passed smoothly.

The baroque luxury of Basilica could not be imagined without yellow (golden) lilies and white roses; a gentle and exquisite note was created by the light green anthuriums. All these flowers decorated the balcony of the Basilica where a worship is celebrated during large festivities. His Holiness Pope Francis also said his blessing words for the Latvia’s centenary from this balcony.

The balcony decor was technically the most complicated and voluminous. It was 25m long and 1 m high, and it took three full days to arrange.

Flowers were brought from various places; local people gave generously colourful dahlias, asters, white and yellow golden-daisies. All the employees involved in the preparatory work were not forgotten—warm pastries were offered to us every day. We really experienced a time, full of love.

Decoration marathon and a challenge for the new professionals

In total, approximately 58 working hours were devoted for the decoration. During this time, a special nature culmination moment was experienced when the summer gave way to the autumn. The change of seasons manifested itself magnificently in weather conditions, with the temperature dropping from +30 to 0, with rain showers and hail. It was a great challenge for all the people involved as the work was performed mostly outside. Despite the weather conditions, the work continued, and 40 flower decors of various sizes were made.

The last 24 hours before the arrival of His Holiness Pope Francis passed in a continuous work; these hours will always remain in our memory as a very special time. Although the work was physical and seemed to be really tiresome, the young people felt themselves full of energy and inspired. The last masterpiece made by the young professionals was the decor for the principal holy painting of Aglona Basilica—the Virgin Miraculous—decorating the 5m long frame with lilies, roses, golden-daisies, and carnations.

The church’s large altar and the small altars were also decorated, several compositions made on stands and in crypts. Large and small flower compositions were made at the overnight stay places of guests and on lunch tables, as well as a flower bouquet to Pope Francis and a flower crown for the girl who gave the bouquet was arranged. 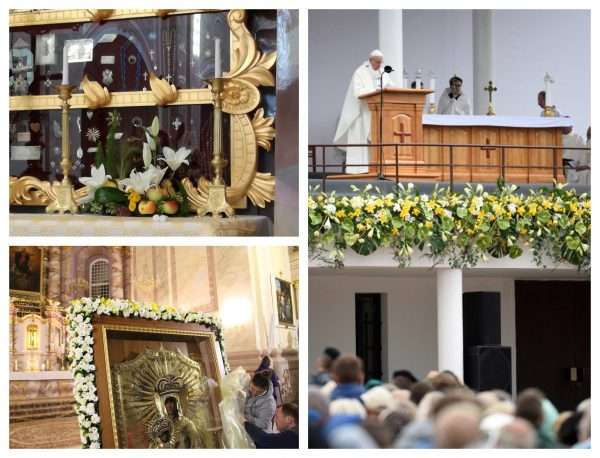 Clouds parting on the arrival of the Pope

The unpredictable weather conditions made us worry about the quality of the decors, as they could have been damaged by rain and wind (the latter really likes to gain speed in the spacious garden of the Aglona Basilica). But on the day His Holiness Pope Francis arrived the nature was silent. When the Pope greeted believers from the helicopter and later, from the popemobile, the sun broke through the clouds! The flowers in the golden light looked amazing and we felt that the heaven has blessed everything we have accomplished.