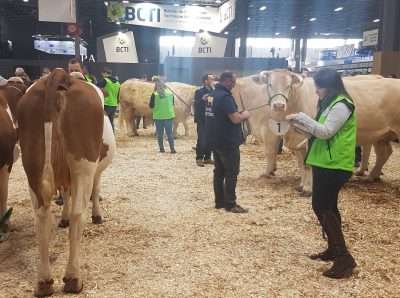 The 2 students, who are both involved in farming livestock outside of college, had been selected from their course group, having demonstrated good knowledge and practical technique during their studies. Both had previous experience of stock judging, and where given the opportunity to demonstrate their skills at the largest Agricultural show in Europe in a highly acclaimed competition involving many countries coming together to compete for the top spots.

On the Tuesday, Emily and Esme took part in a Stock Judging Masterclass; led by Holstein France herd classifier who demonstrated the grading areas in a Holstein, according to International linear judging criteria. Areas included scoring chest width and body depth, hock thickness, udder attachment and balance, and muscularity. For the beef cattle, a Charolais cow was used to demonstrate scoring of rump curve, loin thickness, back length top line and width of chest.

On Wednesday, the competition began in earnest, with 1 hour given to complete stock judging on a total of 4 cows; 2 dairy cattle and 2 beef cattle. Emily completed scoring for Holstein cattle as her dairy breed, and Limousines as her beef. Esme opted for Montbeliard and Charolais.

After an afternoon free to explore the enormous venue, the students attended an awards ceremony in which French representatives thanked all the competitors for their participation, and congratulated on their success. For the stock judging competition, 1st, 2nd and 3rd where presented with a cheque, trophies and other goodies. 1st prize went to Belgium, and 2nd went to our very own student Esme Harrison, who was surprised to have come so high. Emily came 44th, which was also a huge achievement when competing with over 100 other students from across Europe.

In addition to the show, the students were able to squeeze in some sightseeing in Paris – they visited the Eiffel tower, taking the lift to the second floor, and a walk around Paris to the Musee d’Louve. Although tempted by the McDonalds sign, they opted for a French café for lunch, where Emily practiced her French translations.

A highly successful and enjoyable trip, with students that have proven themselves to be a great asset to the college; respectful, knowledgeable and highly skilled. Easton and Otley College are very proud of them representing the UK and making it such an enjoyable trip.