A little example of how EUROPEA impacts school development and Valentine day!

Just before the Carnival holidays we had a very interesting seminar about OpenBadges. Already heard of OpenBadges? Maybe you heard about it in spring 2018 during the general assembly meeting in Blainville, France. That is where I heard of it the first time and immediately saw some potential to use it in our school. It fitted perfectly into our new school project, called Digit@ll, which is about the digitalisation in our school.

Shortly after the GA in France (and UK), we hosted the Carrefour at our school in Ettelbruck, Luxembourg. As you may be aware, Carrefour is an old (we celebrated 30 years) network of a handful of schools, which were deeply involved into the founding of EUROPEA. During the meeting which involved about 80 students, I somehow found the time to have an interesting talk with one of the Norman teachers from Vire, mister Samuel Broult, who teaches ITC there. He knew a lot about badges and worked often with the lecturer of the GA, Philippe Petitqueux. Influenced by both networks, EUROPEA and Carrefour, we decided to start using OpenBadges in our school. But to start it proved not to be so easy as expected. So, we invited both French experts to Ettelbruck to make a whole day workshop on OpenBadges.

The workshop was highly productive and by the end of the day we were able to issue the very first OpenBadges in Luxembourg. We are now strongly motivated to use this tool in our school. Since 3 key actors of the digitalisation of the education in Luxembourg were also attending the workshop it is very likely, that it will even be used nationwide. This would hugely strengthen the impact.

You can expect to hear some more about OpenBadges, since it will also be a topic of the ERASMUS+ project called Digitalis, which is a project involving EUROPEA associations and schools.

So you see through this example, how EUROPEA can influence a teacher, a school, even a nationwide educational system and, who knows, European VET schools. It nearly took 2 years, but the results of a strong network are often long-time effects.

What does it all have to do with Valentine day? Not much, if only that the seminar in Luxembourg was taking place during the 14th of February. Not very romantic, I have to concede, but it allows us to claim that all our badges will be issued with love 😉😘 !!

Yours in EUROPEA, Nicolas Negretti (LU) 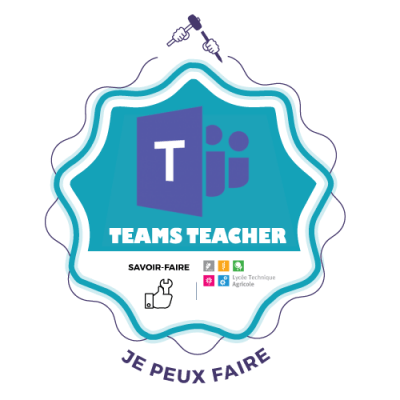 Picture: One of the first badges, attesting that a teacher knows how to use Microsoft Teams in class.

Acknowledgments: many thanks to EUROPEA-Luxembourg and Nicolas (LU) 🙂