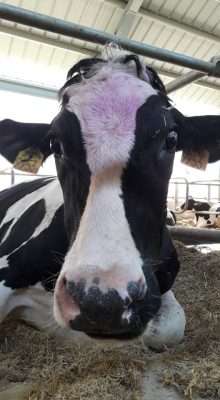 The social life of cows: a bellow for every emotion

Cows have an intense social life and seem far from stupid. These are the conclusions of an interesting work that appeared a few days ago in the journal Nature Scientific Reports (link to the article: https://www.nature.com/articles/s41598-019-54968-4#Sec6), as part of the thesis of doctorate of biologist Alexandra Green, carried out in the University of Sidney.

The cattle (13 heifers, all of the Frisian breed, but of American stock) showed an intense social life and some marked individualities, expressed with the bellowing, which far from being the same and monotonous, were able to interpret (in a broad sense ) the specific psychological state of each animal, highlighted on the basis of the modulation of the voice, which remained distinct for each individual, as demonstrated by the statistical analysis (in all respects, a species of bovine Google Translator), which evaluated 333 different vocalizations emitted by animals in various potentially positive or negative situations (accessible or inaccessible forage, visual isolation between individuals, and more).

The bellow serves to keep in touch with the group, and serves many other purposes, such as commenting on the weather: chatter, exactly like those of us humans. If time threatens to turn ugly, the bellow shifts to low registers. Some information on the social life of friendly and peaceful cattle was already known, but this study has shown without a shadow of a doubt that these animals emit clearly distinct bellowing. The sound of the bellowing sound appears influenced, individual by individual, by the high frequency components, both in potentially “positive” and potentially “negative” situations. In short, social and communicative animals, for which it is hoped that the results of the next scientific works will improve their well-being and contribute to their happiness, perhaps by creating with a “human / bovine” dictionary that allows a deeper mutual knowledge.

Acknowledgements: many thanks to EUROPEA-Italy and Maurizio (IT) 🙂